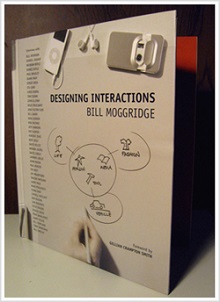 Award-winning designer Bill Moggridge’s first book, is more than just a collection of interviews with respected, high tech luminaries like Larry Page, Sergey Brin, Doug Engelbart and Bill Atkinson. With over 700 pages, this tour de force promises to be a compelling read. Does it deliver on that promise? Yes, indeed! It was voted as one of the 10 Best Innovation and Design Books of 2006 by BusinessWeek magazine. Even though the interviews took place between 2001 and 2004, the ideas discussed are still relevant today.
The author is one of the founders of IDEO, he also is on the faculty of the London Business School and Stanford University.
Due to the nature of the book, this review will be mainly descriptive, yet still critical without resorting to polemics.

About Face 3, The Essentials of Interaction Design

About Face is an essential book in any serious User Experience professional’s library. This should come as no surprise considering the reputation of the authors.
Alan Cooper is widely regarded as the "Father of Visual Basic" and has been a pioneer in the software development industry for over three decades. He is also well known for developing the concept of Personas, which is one of the fundamental building blocks of Interaction Design.