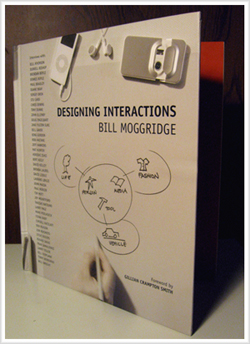 Award-winning designer Bill Moggridge’s first book, is more than just a collection of interviews with respected, high tech luminaries like Larry Page, Sergey Brin, Doug Engelbart and Bill Atkinson. With over 700 pages, this tour de force promises to be a compelling read. Does it deliver on that promise? Yes, indeed! It was voted as one of the 10 Best Innovation and Design Books of 2006 by BusinessWeek magazine. Even though the interviews took place between 2001 and 2004, the ideas discussed are still relevant today.
The author is one of the founders of IDEO, he also is on the faculty of the London Business School and Stanford University.
Due to the nature of the book, this review will be mainly descriptive, yet still critical without resorting to polemics.

Who should read the book?
Anyone who develops or designs "consumer technology" including User Interfaces for Web sites, Mobile apps, Video games etc. will find invaluable insights and ideas inside. Even if you are not a technology professional, Moggridge’s style and approach will appeal to you and the included DVD makes buying the book even more rewarding. Since it has a somewhat modular structure, you can easily pick and choose chapters that you find relevant.
GUI / UX designers and front-end developers will find the first two chapters very interesting. There you can read about the invention of the mouse, the desktop metaphor, the Apple Macintosh and Mac OS X .
Game developers will find chapter 5 fascinating — Bing Gordon, co–founder Electronic Arts and Will Wright, creator of the Sims among others provide excellent contributions.
Web developers and programmers can get a glimpse of how Google really started in chapter 7. It also includes Terry Winograd, the Stanford professor who supervised Larry Page on his Ph.D thesis.
New media/multimedia designers will find chapter 8 very inspiring with ideas and insights from Hiroshi Ishii at the MIT Media Lab. Joy Mountford also discusses how the early prototypes for QuickTime were developed at Apple.
Mobile App developers can read about the evolution of the telephone and how software and services influence the design and development of cell phones. Chapter 6 uses the Japanese i–mode service as a case study.

There’s a mouse on your desktop!
It’s impossible to write about the history of Human Computer Interaction (HCI), without mentioning Doug Engelbart. His interview will certainly interest anyone who has ever used a mouse. Chances are that even as you read this blog you are using one. Even though touch-screens and gesture based interactions seem to be gaining wider acceptance, the mouse is still arguably the ultimate device for interacting with digital display screens. Dr. Engelbart is one the pre–eminent pioneers in this field and his interview shows why.
Why is the mouse easier to point and click with than a trackball or joystick or Trackpoint® button? Stu Card helped to develop a "science that supports design" which explains the reason. When this theory was applied to the design of a better mouse, he was able to prove that the mouse was the ultimate point and click device. Even now, over 30 years later, this theory is still undisputed.
The desktop metaphor is another concept that is fundamental to HCI in the age of personal computers. This concept fits the mouse like a hand–in–glove. It is very hard to imagine one without the other. Tim Mott and Larry Tesler, colleagues at Xerox PARC worked on developing this idea. Then, it was called the "office schematic"

The metaphor was that the entire documents could be grabbed by the mouse and moved around on the screen. We didn’t think about it as a desktop, we thought about it as moving these documents around an office

Anyone who has ever used a word processor will find Larry Tesler’s account of inventing "cut & paste" and the "double–click", very fascinating.

Do you want fries with your Mac?
The story of how the computer became personal and adapted for home use, starts with Apple Inc. Steve Jobs and Steve Wozniak were perhaps the most influential people in creating this paradigm shift. Even though neither of them were featured directly in this book, other significant Apple employees like Bill Atkinson and Cordell Ratzlaff fill in the gaps.
Here you will find first person accounts of how the Apple Macintosh was invented and why it was such an important milestone in the history of the PC. This chapter explains how and why Bill Atkinson became known as "’Mr. User Interface‘ at Apple". Eight full page color photographs, showing early screen shots of the Apple Lisa and Macintosh prototypes, help to illustrate this story. This section is essential for any User Interface or Front End Developer.
Cordell Ratzlaff should probably be called “Mr. Mac OS X” for his role in creating this groundbreaking operating system. Apart from making the new interface "look so good, you wanna lick it" creating a proper eject icon instead of a trash can, is another significant improvement. I still remember how strange it felt, many years ago, when someone showed me how to eject my floppy on the Apple Power PC running Mac OS 7.5.
With its radically new look and feel, Mac OS X still relies on the desktop metaphor, even though there are slight modifications, as the author points out –

We still use words like window, desktop and folder, but the appearance and behavior of the designs have evolved to a level where they communicate their own attributes rather than the characteristics of a throwback to a physical world

Is the desktop slowly becoming a dinosaur? It will be interesting to see what comes next. This is a challenge for GUI and UX developers.
How did Microsoft develop a better mouse than Apple? Paul Bradley, of Matrix Product Design, talks about creating what was perhaps the first "ergonomic mouse". At that time even the Apple mouse had a rather rectilinear shape. The author clearly explains why Microsoft’s approach lead to a more user friendly shape.

Surfing a tsunami…
Imagine the web without Google… The search engine has a profound effect on the way we use the internet. A lot has changed since the 2002 interviews with Sergey and Larry, however their insightful ideas are still very relevant today. It’s amazing that a simple task like finding information online could be so complex. If only you could just type what you need in your browser window and instantly find what you are looking for, wouldn’t that be just great? Instead of searching through thousands of search results. Sometimes you seem to need another search engine for your search results!
Could you imagine using a computer without the internet? Most people have become totally dependent on the web and the way they interact with it is of utmost importance.
In this chapter, Steve Rogers, the team lead for the BBC homepage redesign project, talks about that process. This interview gives a different point of view from the Google site. The BBC site is designed to communicate, inform and entertain the users, while Google helps you find other web sites.

Final word
Did the author achieve his goal? How well did the book fulfill its stated purpose of explaining the history of interaction design?
With over 700 pages containing several detailed examples of interaction design Bill Moggridge has done a commendable job. Especially for a first time author, the book has been very thoroughly researched. The logical structure of the book, with each chapter starting with a brief summary, allows the reader to focus on relevant sections. You could use the book as reference, since it’s very easy to find specific topics that may be important to you. This is a book that you will find yourself reading over and over again because of the brilliant and insightful ideas it contains.