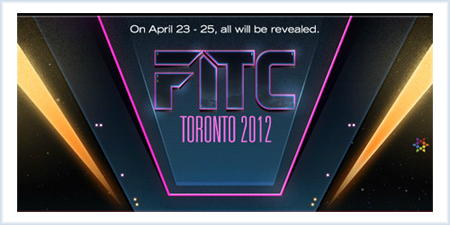 The Design and Technology festival aka FITC (Future. Innovation. Technology. Creativity) will take place from April 23 – 25 in the heart of downtown Toronto. This promises to be another great event with over 40 world class speakers, including…

Lee Brimelow – runs a very well known video tutorial site. Has some really cool stuff on interactive development including Flash and ActionScript. He currently works for Adobe and earlier in his career worked at Stanford University.

Colin Moock – the ActionScript guru. Every serious Flash/Flex developer knows who he is. Wrote the Essential ActionScript book series for Adobe Developer Library. I attended one of his workshops a few years ago and WoW! He really knows the stuff inside out. And hey he’s Canadian.

Denise Jacobs – Well, here is one of the very few women in the male–dominated web design industry. Recently heard about her through Smashing Magazine’s Meetup in Basel Switzerland (nope I wasn’t there, that’s the power of the web). And now she’s coming here to Toronto. She’s very much into CSS and has written a lot about the subject.

For those who like free stuff, and who doesn’t… Web Designer Wall is offering two free tickets